What is an “Outside IR35” Contract? 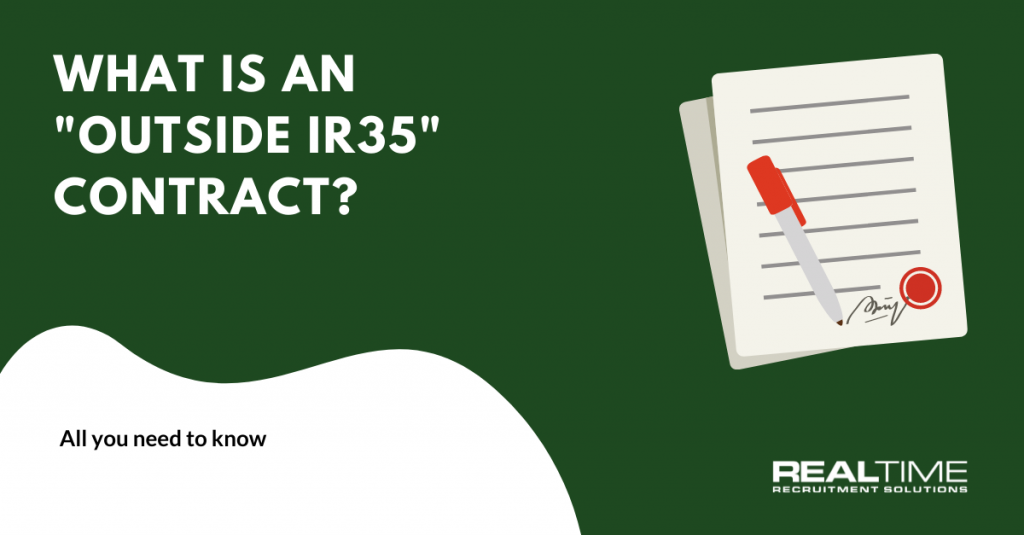 What is an “Outside IR35” Contract?

Clients and contractors tell me they’ve been assured by someone, or a business, that they don’t need to worry because they have an “outside IR35 contract”. Wow – if only someone had let HMRC and HMG know, they wouldn’t have had to do four consultations and publish rafts of legislation, just check the contract!

Of course, such a thing does not exist. It is possible, however, for a contract to do some of the leg-work when you’re looking to demonstrate IR35 status.

A starting point – the contract should reflect what actually happens. It should not be a document that’s signed as a tick box and hidden away somewhere.

Let me say that again – the contract (and its associated documents) should reflect what actually happens. If it doesn’t, you may as well not bother – it doesn’t matter how well written it is. If it’s contrived, it’s useless.

A second important point to note: a contract cannot be IR35 proof. You cannot get a contract that ‘makes you outside IR35’. Sorry.

You can, however, get a contract that does not make you inside IR35. That may sound like I’m being pedantic, but I’m really not. The contract should set out certain information, but generally it’s not specific to each project or client, so the contract should not raise any IR35 red flags – it should form a solid foundation from which to build.

It may seem like contracting 101, but the legal entities agreeing to the contract are the recruitment agency and the company through which the individual provides services i.e. the limited company (or PSC in HMRC parlance). Imagine an example where Jane Bloggs supplies services to end client ABC Limited via JBlo Limited facilitated by RTRS.

The contract is between JBlo Limited and RTRS. The individual who is delivering the services (Jane in our example) can be named in the schedule with reference to a clause in the contract, which stipulates that no single individual must deliver services. Alongside this contract, another contract exists between JBlo and the individual (implied or actual) and between RTRS and ABC Limited.

The Top and Bottom Contract

One of the positives of the reforms is that it makes everyone in the supply chain have some responsibility, meaning it’s in everyone’s interests to make sure the contracts are aligned. If we stick with our example, then if ABC Limited has a contract with RTRS which says, “Jane Bloggs supplies the services” and the contract between RTRS and JBlo Limited says, “Any suitable qualified and skilled individual working via JBlo Limited can supply the services”, then Jane may well think she has the right to substitution, as she has no visibility of the top contract.

The reforms mean that she will get a status determination decision which says, “We think this is inside because we would be unwilling to accept a substitute” – or something to that effect.

The contract should not have a scope of delivery. The contract is overarching and covers the delivery of services as and when agreed.

A schedule should detail the scope of the services and other project by project information, such as the client, the rate, the working arrangements and so forth.

The contract should stipulate what triggers payment, when payment might not be made, and the payment terms. When agreeing the project, it is usual to agree the length of time it is expected to take, and the resources within that time.

If you consider that a project can take four people one week, or one person four weeks, it makes sense that both elements are agreed up front. This should be noted in the schedule, i.e. six months commencing 1st August circa 100 days @ £400 per day. It is critical that it is made clear that this is not binding, i.e. neither party is bound to offer nor accept such a level of work, but it is provided for planning purposes. That statement should be in the contract, and the detail of the estimate is on a per project basis, so it sits in the schedule.

The contract is where you should detail how the payments are made – for example, on a self-bill invoicing basis, on receipt of suitable approval by the client for days spent. Invoices are generated weekly, and paid within 21 days of being generated.

The overarching contract should consider what happens in the event of a dispute, when the contract is terminated and so forth. In these matters, it is possible to ensure there are no IR35 red flags. Payment is only made based upon services delivered to the client’s satisfaction, and any invoice dispute must happen within a given period (to give the contractor protection).

Whilst the project length and volume of work has been estimated, it is explicitly not a binding commitment to a volume of work by either party. Therefore, a termination clause is essential. This should set out who is able to sever the agreement, under what circumstances and so on.

The cleanest approach is generally that a notice period can be specified in the schedule, but that in the event that services are not delivered in this period (either because the client does not provide any work, or the limited company does not undertake any) no payment is due.

The contract should only detail things like the obligations of the limited company, such as all work being delivered to a high standard, all individuals complying with health and safety when on site and so on.

The specifics of the working arrangements should be detailed on a project by project basis, and where there are any elements of control or being “part and parcel of the organisation” it should be clear why. For example, “Individual delivering services will attend site each Monday from 8am to 12pm to facilitate project updates between all stakeholders. Outside of this time the limited company will determine a schedule appropriate to the project. Days billed will constitute delivery of a full day’s services, regardless of when they are billed.”

You should consider the following to be included:

In summary, you can use this guide as to what a good not inside IR35 contractual set of documents looks like.