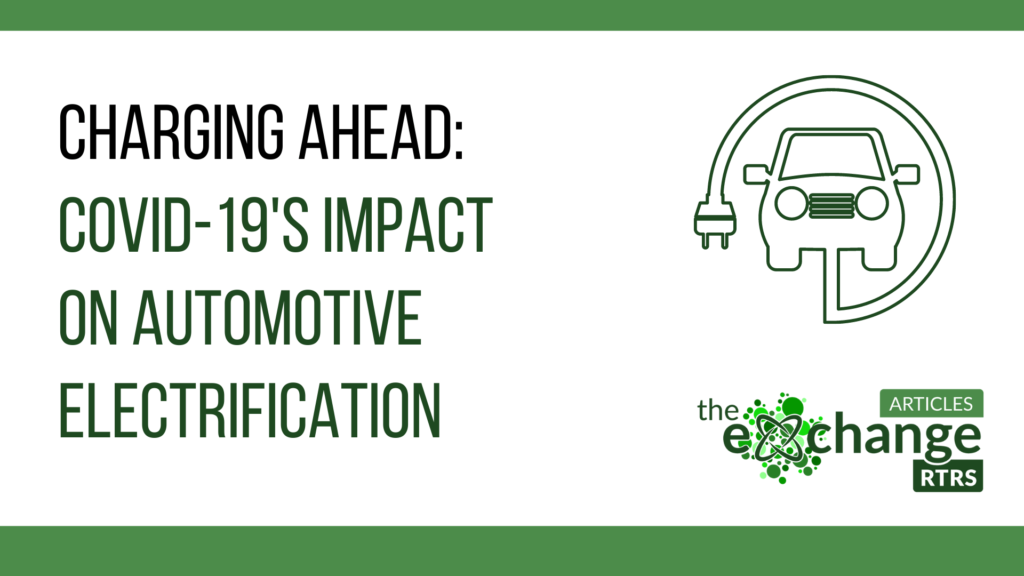 While the effect of the coronavirus has been severe, it has also prompted many of us to think more deeply about the world we want beyond the pandemic and how it should be shaped.

The overnight disappearance of traffic and the dropping of emissions has renewed the appreciation of clean air and greener cities. Is this just a fleeting change, or could it lead to longer-lasting falls in emissions? As we come out of travel bans, and people start to move back to the office, we explore the changing perceptions and attitudes towards EV’s as well as the work that remains for those looking for true electrification.

If we were to take one certainty from COVID-19, it’s that everyone has had to adapt, change and break certain habits they thought were unshakeable.

Pandemics, or events that cause significant disruption, have traditionally had a transformative power on societal norms. The Spanish Flu Pandemic of 1918 marked a turning point in the fight against the use of spittoons and the near end of chewing tobacco.

Skip forward to 2020 and we’re seeing change in a different way as more and more of the workforce question the safety and validity of large office spaces and busy commuter transport after enjoying the benefits of remote working – both on their professional lives and on the environment.

The benefits many found heartening early on—from cleaner air to birdsong newly audible as cars and planes went quiet—were always likely to be temporary as economical demands pushed us back into old habits. The benefits of home working, combined with the obvious environmental benefits, have left a lasting impression on consumers deciding on their next car.

A What Car? survey of 6632 new car buyers revealed that nearly 19% have changed the brands they were considering pre-lockdown, and 25% will be moving to a smaller car. Notably, around one in 12 buyers have said they are looking to buy a pure EV as a result of the lockdown, with one in seven likely to opt for a hybrid.

Although just one survey, it does demonstrate the change in sentiment for car buyers. With that in mind, attention turns to manufacturers and developers.

Joseph Schumpeter famously argued that the process of “creative destruction”, while painful, fosters innovation and progress by discarding the old and familiar for the new and better. From this perspective, the downturn may be a source of opportunities for innovators and innovation systems.

One such area threatening serious innovation is the automotive industry, which currently teters on the edge of serious electrification.

But as some have called for the relaxing of the EU emissions targets to speed up economic recovery, other manufacturers and developers aren’t backing down.

“Electrification will go faster. I think it would be naive to believe after some months, everything will return to normal, and our customers will come back into a showroom asking for diesel cars. They will ask even more for electric cars. And that is speeding up.”

Volvo CEO Håkan Samuelsson certainly pulled no punches with this assessment, but he’s not alone. With business leaders calling for a “Green Stimulus” to assist with recovery, it’s clear that there is strong willingness to capture this opportunity to reshape and steer our economy to a greener economy of the future.

Whether it’s data from the Royal Netherlands Meteorological Institute showing the reductions of nitrogen dioxide (NO2) concentrations in Rome, Madrid and Milan (40%), or Paris (54%), or surveys showing that that 51% of the public have noticed the cleaner air – it’s clear the coronavirus lockdown has caused measurable environmental improvement. Having had a taste of cleaner air and reduced emissions, many don’t want to go back and are actively participating in the change – but the question remained: would that sentiment turn into demand?

William Storrie, Chief Engineer – Mechatronics at Haldex Brake Solutions, who have been in the concept phase of an Autonomous, Electrified and scalable brake system for large trucks, believes that COVID will serve as an accelerant for electrification of automotion.

“I expect the industry to bounce back quickly as Internal Combustion moves into more mainstream Electrification and then finally, on to full Automation. There is a tremendous amount of change happening and people will not stop demanding it. The current situation has increased the awareness of the environmental impact of ICE, which will only accelerate the demands for electrification”

The latest data from the EV market echoes William’s statement. The combined market share of EVs and plug-in hybrids jumped 6.8 percent in the first quarter of the year, faster than the 2.5 percent growth seen in the same quarter last year, according to sales figures from the European Automobile Manufacturers’ Association (ACEA).

What More Needs to be Done?

Despite positive changes in both consumers and manufacturers and encouraging figures coming from the EV market – more can still be done to ensure that these changes are capitalised on.

What needs to be done to capitalise on this growing hunger? One idea came in the form of a scrappage plan that would incentivise the transition to electric motors and help the UK hit the 2030 emissions target. A plan as ambitious as this required strong backing and, for a long time, it was believed that the government was going to support that move in an effort to help drive towards emission goals. Incentives of up to £6000 were announced by the Independant in early July but recent news from the Financial Times has cast a shadow of doubt over the scheme. With no official line from the government, car buyers are delaying their decisions on their next car with the same What Car? Survey reporting that that 29% of car buyers are already delaying plans to buy a new car post-lockdown in the hope of a taxpayer-backed scrappage scheme.

Battery sizes have increased significantly over the last few years, to give buyers confidence that charging will be infrequent and therefore less inconvenient. Yet this trend has a dramatic impact on vehicle cost, given the high proportion made-up by the battery pack. For example, increasing from a 40kWh to 80kWh battery pack, could increase cost by around £5000, given a typical cost of around £120 per kWh4. While some users are willing to pay for increased convenience, others may be more willing to compromise, to bring forward their change to electric power. Powertrain modularity and steep price differentiation can be used to allow customers to self- identify their charging access or preference for convenience versus lower cost.

One of the first questions people have is around the practicality of charging electric cars. The most common public fast charging people will find is 50kW, which makes up the majority of today’s fast-charge infrastructure. This will offer a reasonable top-up in 30 minutes to 1 hour, which will often be enough for the onward journey or a number of days of urban driving.

The EV infrastructure and charging network has also been affected by COVID-19 restrictions with many company statements emerging. In the United Kingdom, ubitricity and Pod Point have stopped setting up new charging stations, as per the directive from the government. “We’ll be pausing the installation of new charge points under the second phase of the Go Ultra Low City Scheme, but we will still be maintaining and conducting repairs and finishing any works which are currently underway,” ubitricity’s managing director, Daniel Bentham, was quoted as saying by news website Current News.

With the workplace fragmented and many companies working on longer term working from home policies, it remains to be seen how the long term development of the charging network will be impacted.